Exablaze’s ExaNIC X10 is an ultra low latency network interface card which delivers the lowest latency in the industry: 780ns application to application for small Ethernet frames (using the native API) and under a microsecond for small TCP and UDP payloads (using the transparent socket acceleration library).

The ExaNIC is a 10Gbps PCI Express network card interface card specifically optimized for low latency environments.
While initially conceived and built for use in latency-sensitive financial applications such as high frequency trading, the ExaNIC has appeal that extends to any environment where latency is key. 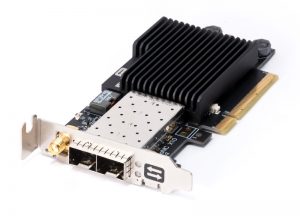 Designed from the ground up to minimize latency, the ExaNIC delivers record-breaking performance numbers.
On an Intel Ivy Bridge test system, median latency from application to network to application is 780 nanoseconds for small packets, which is significantly better than competing network cards on the same hardware. Half round trip TCP latencies are as low as 930 nanoseconds for small payloads.

In addition to a standard Linux driver, a transparent TCP and UDP acceleration library is included, as well as a library for low-level access.
A transparent socket acceleration library allows applications to benefit from the low latency of kernel bypass, in most cases without modifications to the applications. For the most latency sensitive applications, a library called ‘libexanic’ allows direct low-level access to the ExaNIC hardware and includes simple functions for sending and receiving Ethernet frames. With the optional firmware development kit, it is even possible to extend the ExaNIC firmware and add your own logic to the onboard FPGA.

Flow steering delivers packets to the right application’s receive buffer, while flow hashing distributes packets across multiple CPU cores for demanding capture applications. Built-in timestamping functionality records each frame’s arrival time to a granularity of 6.2ns.
These timestamps are available through the API and through a capture utility which can write tcp dumpcompatible capture files. Additionally, the ExaNIC has a Pulse-Per-Second (PPS) input which can be used to synchronize the ExaNIC clock with a PPS source such as a GPS receiver, allowing users to meaningfully compare captured timestamps across multiple servers and geographic locations. The PPS input can also act as a PPS output for instances where one ExaNIC should act as the PPS source for other devices in a rack.

The ExaNIC includes integrated support for bridging, which can further reduce latency by hundreds of nanoseconds.
Normally sharing an upstream connection between multiple servers would necessitate introducing a switch. The bridging feature allows the most latency critical server to be directly connected to the upstream connection. Packets not destined for the local server can be bridged to the second port, transparently and with low latency. This port could be connected to a backup server or to a downstream switch.

More information about benchmarking methodology is available on request.