A Computer Worth Bragging About

XENON SystemsBack to NewsBack to Press ReleasesA Computer Worth Bragging About

We all feel quite virtuous when we do our bit for the environment – whether it’s taking our own bags to the shops, sorting our recycling or leaving the car at home. But have you ever thought about doing the same for your computer? We have – and we’ve got a pretty certificate to prove it.

Forgive us for bragging, but our supercomputer in Canberra, ‘Bragg’, has recently been named the world’s 10th most energy-efficient supercomputer in the Green500 list, which ranks the energy use of supercomputers according to performance-per-watt. 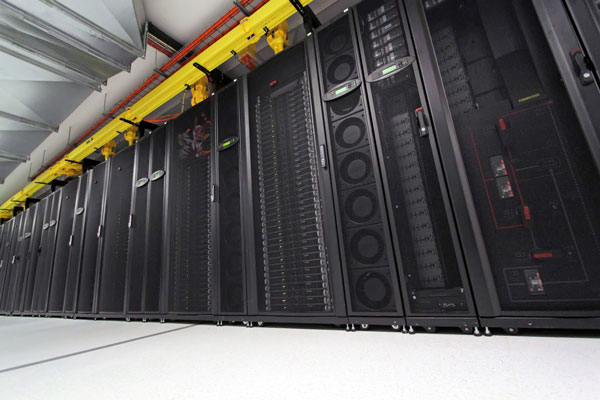 Powerful and eco-friendly? This is one super computer worth Bragging about.

And it does all of this using less energy per MegaFLOP (a unit of supercomputer speed) than all but 9 of the world’s fastest computers. But how?

Well, Bragg is a GPU cluster which means it gets its speed from Graphic Processing Units (GPUs) initially designed for fancy graphics in computer games. A few years back, computer geeks realised GPUs could do more than handle images of shoot ’em up games or Minecraft. They could also perform multiple tasks at once at a fraction of the price of traditional computers. GPUs can be used for a lot more than fancy Minecraft graphics. Image: Alan Montavon.

Our Bragg cluster has had three GPU upgrades during its four year life. It’s now over ten times faster and twice as energy efficient. This has kept it ‘up to speed’ to handle the workloads our scientists throw at it.

But it wasn’t that easy to get a top spot on the list. First we had to measure the number of double precision floating point operations per second (or FLOPS) by running a performance test known as the LINPACK benchmark.

Then we submitted this number (if you’re wondering, it was 167.5 TFLOPS or 167.5×10**12 FLOPS) to the TOP500 list – where we ranked at number 260. This qualified us to submit to the Green500 list. To do this, we ran the LINPACK benchmark while measuring the power consumption on the Bragg cluster in the Canberra Data Centre.

To put it another way, if you have an old 100 watt light at home, Bragg can perform 236 billion calculations per second using that amount of power. Check it out in action:

Bragg isn’t our only cool supercomputer. The new iVEC Pawsey Centre in WA is Australia’s largest supercomputer, used for incredible data-intensive projects like the world’s largest radio telescope, the future Square Kilometre Array. It uses a recycled groundwater cooling system which will save around 38.5 million litres of water per year compared to traditional cooling methods.