Today at GTC NVIDIA® announced their next GTX Titan family card. Dubbed the GTX Titan Z (no idea yet on why it’s Z), the card is NVIDIA’s obligatory entry into the dual-GPU/single-card market, finally bringing NVIDIA’s flagship GK110 GPU into a dual-GPU desktop/workstation product.

While NVIDIA® has not released the complete details about the product – in particular we don’t know precise clock speeds or TDPs – we have been given some information on core configuration, memory, pricing, and availability. 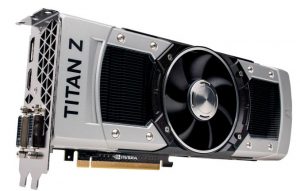 In brief, the GTX Titan Z is a pair of fully enabled GK110 GPUs. NVIDIA® isn’t cutting any SMXes or ROP partitions to bring down power consumption, so each half of the card is equivalent to a GTX 780 Ti or GTX Titan Black, operating at whatever (presumably lower) clock speeds NVIDIA® has picked. And although we don’t have precise clock speeds, NVIDIA® has quoted the card as having 8 TFLOPS of FP32 performance, which would put the GPU clockspeed at around 700MHz, nearly 200MHz below GTX Titan Black’s base clock (to say nothing of boost clocks).

On the memory front GTX Titan Z is configured with 12GB of VRAM, 6GB per GPU. NVIDIA’s consumer arm has also released the memory clock speed specifications, telling us that the card won’t be making any compromises there, operating at the same 7GHz memory clock speed of the GTX Titan Black. This being something of a big accomplishment given the minimal routing space a dual-GPU card provides.

In terms of build the GTX Titan Z shares a lot of similarities to NVIDIA’s previous generation dual-GPU card, the GTX 690. NVIDIA® is keeping the split blower design, with a single axial fan pushing out air via both the front and the back of the card, essentially exhausting half the hot air and sending the other half back into the case. We haven’t had any hands-on time with the card, but NVIDIA® is clearly staying with the black metal styling of the GTX Titan Black.

The other major unknown right now is power consumption. GTX Titan Black is rated for 250W, and meanwhile NVIDIA® was able to get a pair of roughly 200W GTX 680s into the 300W GTX 690 (with reduced clock speeds). So it’s not implausible that GTX Titan Z is a 375W card, but we’ll have to wait and see.